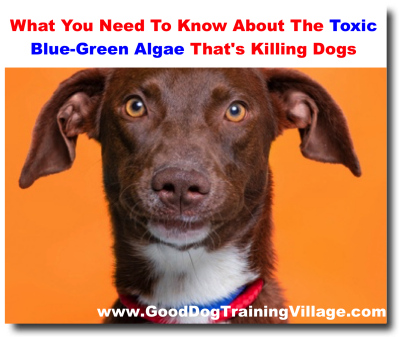 The blooms can be found in fresh and salt water and multiply in hot weather.

Temperatures soared to 96 degrees in Wilmington, North Carolina on Thursday. So, Melissa Martin and Denise Mintz gathered up their dogs Abby, Harpo and Izzy and headed to a nearby pond for a swim.

In a heartbreaking Facebook post, Martin revealed that they were poisoned by toxic cyanobacteria, commonly known as blue-green algae. According to the Centers for Disease Control, harmful algal blooms or HABs, are found in fresh and salt water, and produce toxins that can cause damage to the brain, liver and kidneys of an animal. They are primarily a concern in hot summer months.

"What started as a fun night for them has ended in the biggest loss of our lives," Martin wrote. "We are gutted. I wish I could do today over. I would give anything to have one more day with them."

A similar case was reported in Marietta, Georgia, on Saturday, and last week, the city of Austin closed Red Bud Isle, a popular off-leash waterfront park, following the deaths of three dogs.

"There have been blue-green algae blooms in Austin in previous years, but we have not been aware of any effects from neurotoxins," Austin city officials said in a recent statement warning owners not to let their dogs swim in an area lake. "Zebra mussels and climate change are potential contributing factors in this situation."

Dr. David Dorman a board-certified veterinary toxicologist says risk to dogs from harmful algae blooms in small bodies of water has increased in the last decade. The harmful algae blooms can grow in both fresh or marine water -- and they aren't always visible. Martin noted in her Facebook post that the pond where her dogs had played was "crystal clear."

"We don't always see the evidence of the blooms because the wind can break them up," Dorman told TODAY. "But the poison is still there."

Despite the name, blue green algae can range in color from brown to red, and they are typically spread across the water's surface or on the shoreline, Dorman said. Sometimes the algae blooms have a bad odor.

Dorman, who is professor of toxicology at North Carolina State University, stressed the importance of paying attention to advisories. For instance, there are currently several "no-swim" warnings in New Jersey due to toxic algae.

Symptoms of exposure to cyanotoxins in animals can include excessive salivation, fatigue, difficulty breathing, vomiting, diarrhea and seizures, according to the United States Environmental Protection Agency.

Symptoms in dogs can occur within minutes to hours of exposure, Austin officials said in the release. People or dogs who come in contact with toxic water should rinse off as soon as possible.

Meanwhile, Martin and Mintz have started a public campaign to put warning systems in place where blue-green algae is present.

"Put some signs up so people know," Martin told NBC affiliate WECT. "Just put some signs up. That is my mission. That is what we will be working towards right now is getting signs on every body of water."