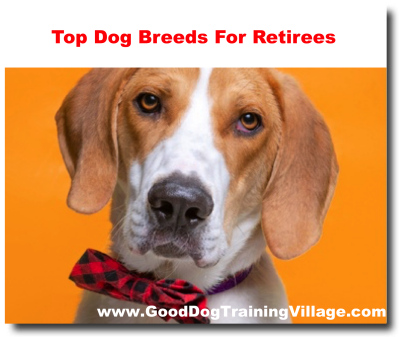 The diversity within the dog species is really quite remarkable. They range from 4-pound Chihuahuas to 200-pound Great Danes, have fur anywhere from hairless to triple coats to long and shaggy, and their temperaments vary greatly as well.

You may also have less financial resources to have a dog that needs regular professional grooming or is prone to medical issues that require frequent visits to the veterinarian. And you should consider the future, and whether you might relocate to a senior living facility that only allows certain dogs.

Lastly, think about adopting a grown dog from a rescue rather than getting a puppy. Puppies are a lot of work and interrupted sleep, and you may not want to deal with that once you retire.

Here are top dogs that are least suited to retirees, based on their energy level, grooming needs, and medical problems.

The Dalmatian is no doubt an iconic dog. Disney made us love them, but there's a reason Pongo and Perdy met on a walk! They are high-energy dogs who require a lot of exercise. If not given enough outdoor time, they can become destructive indoors. They are also stubborn and difficult to train. In addition, according to puppytoob.com, they can be fearful or overly aggressive, depending on their lineage. All red flags for retirees looking for a chill companion in their golden years.

The Jack Russell Terrier is all terrier, meaning they are bundles of boundless energy. They made the list for the 20 most high-maintenance dogs on iheartdogs.com, and that's enough to make them a poor choice for retirees.

Another high-energy breed, the German Shorthaired Pointer wants to run. A lot. So, if you are not in the habit of taking a daily, say 5-mile run, then this isn't the breed for you.

English Springer Spaniels are high-energy dogs, with considerable grooming requirements, according to iheartdogs.com. The site also says the breed is prone to "Springer rage," where they attack anything close to them, adding that in a survey by The Atlantic, one in four Springer Spaniels had bitten somebody. All good reasons to avoid this breed in your retirement years.

Beagles can tend to be stubborn and obstinate. According to puppytoob.com, Beagles have a long list of shortcomings, one of which is the tendency to howl and bay. They also shed a lot and have a very distinct odor. All of these are good reasons not to have a Beagle if you live in an apartment, senior living facility, or really anywhere you have neighbors in close proximity.

Irish Setters are perpetual puppies -- and although at first that seems appealing, they can be difficult to train. They require a lot of exercise as well as regular brushing to maintain their coats. According to dogtime.com, Irish Setters are not adaptable to apartment living, and they don't tolerate being left alone. They also give them two out of five stars for general health.

The Siberian Husky is another high-maintenance dog, according to iheartdogs.com, which means it could also be a poor choice for retirees. Not only do they shed constantly, but they are runners who need daily exercise. They are also known to be escape artists, and if given the chance, they will bolt!

The Airdale Terrier is a hardworking dog that can be trained to do police work, hunt rodents, or hunt game. And in true terrier form, Airdales are high-energy dogs that need to be active to be happy.

Just looking at this beautiful dog -- you know that coat is going to require constant grooming. Add to that, this is a high-energy breed, and you know it's a big commitment to keep this dog happy -- just maybe not the commitment you are looking for in your retirement years.

These medium-sized pups are perhaps one of the oldest breed of dogs. But they are high energy, requiring lots of activity and playtime.

The Australian Cattle Dog is a medium-sized dog with a determined personality and a ton of energy. These dogs are happiest in large, open spaces with a job to do, according to Purina.com. They are not well-suited for apartment living, and they can tend to bark excessively.

Coming in at No. 3 on iheartdogs.com's list of the most high-maintenance dogs is the Border Collie. They are often considered to be one of the smartest dog breeds. They are also very active, and because they are so intelligent, they need mental stimulation as well. If you've ever watched dog agility competitions or freestyle competitions, then you've seen lots of Border Collies doing amazing tricks. But unless you're looking for a second career training your dog when you retire, maybe this isn't the breed for you.

Akitas are large, furry dogs that require exercise, socialization, training, and strong leadership from their owners. According to iheartdogs.com, Akitas can become aggressive if not properly handled. They also may not tolerate small children, so not a good choice if you have grandchildren who visit.

Yes, although one of the most popular dog breeds, a Lab might not be the best choice anymore when you retire. Bottom line, they are high-energy dogs for most of their lives.

This breed is known to be highly intelligent. But they are also extremely active, and if not given enough exercise, they can become destructive. According to puppytoob.com, Australian Shepherds demand attention for 12 hours a day! So, unless you retired in order to care for a dog, you might think twice before acquiring this breed.

Rottweilers are also large, powerful dogs. They require firm leadership, plenty of socialization, and training. Their size and strength alone make them difficult and unsuitable for apartment living.

This dog has a temperament that puppytoob.com describes as "complicated." The Chow Chow takes time to understand, and so they can be difficult to manage. Plus, just look at all that fur! Maybe you retired so you could vacuum all day, every day. Not!

Yes, even the ever popular Golden Retriever is on the list for the worst dogs for retirees. You have to consider the needs of the breed to properly understand why this loving dog is on the list. You may have had Goldens all your life. And when you were young and had kids, they were the perfect choice! But they also got the attention of lots of people to meet their needs. What about when there aren't all those people around? These dogs need lots of exercise and attention, and now that you are retired, will you be able to provide that? That is really the question. If this is "your" breed, then you know they act like puppies for most of their lives, and although they'll always be loyal and good, they also deserve to be happy.

Although one of the most popular dog breeds in the country, German Shepherds might not be the best choice for retirees. To begin with, they are prone to a variety of health issues which may make them too expensive to care for on a fixed income. They are also working dogs who do best with strong leadership and direction. If not properly led, they can become highly territorial and protective of their owners -- not in a good way.

The Belgian Malinois is a high-energy pooch, often used as a police or military dog. They require socialization and training. They are working dogs who want a job. If you want a furry companion to sit by your side, this is definitely not the one to get.

Boxers are another high-energy dog that require plenty of daily exercise. But even if you want an active pooch, Boxers may run up high vet bills. They are prone to many different medical conditions, such as heart disease, cancer, hyperthyroidism, hip dysplasia, neurological disease, and more. So for all their positive attributes, if you can't afford a bunch of vet bills, you shouldn't get a Boxer.