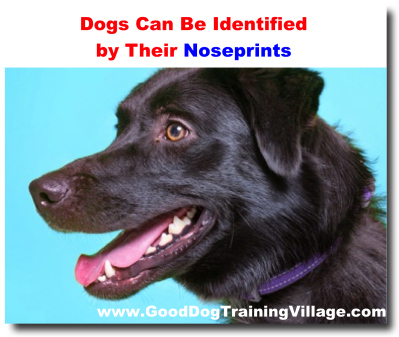 Dogs Can Be Identified by Their Noseprints

You've heard that a person's fingerprints are unique and can be used to identify them, but did you know the same applies a dog's nose print? This actually isn't brand-new information. The Canadian Kennel Club has been using prints as proof of identity since 1938. It's believed to be reliable than dog tags, which can be easily lost, and it's less invasive than microchipping. Microchipping can also fail. Once a nose print is in the system, however, it's always there.

Dog's identity can be determined via their nose.

Tech companies are getting in on the concept. In 2011, ID Systems Integrators developed "Dognose ID." You get your dog's nose prints done, and then send it along with a photo of your dog to the company. They send you a Pet ID card with the nose print, photo, and contact info, as well as a collar tag with a ID number, your phone number, and ID Systems' number. This way, if your dog gets lost, you can call ID Systems and they will help you find your furry friend. If someone else finds your dog, they can look at the tag.

Megvii, an AI startup in China, has also been working on noseprint technology. They are better known as a supplier of facial recognition software for the Chinese government, but they're now expanding into dogs. Megvii doesn't even need a physical print. Using just your smartphone, you can take a few pictures of your dog's nose from different angles, and the software is able to analyze it and identify the most essential marks. According to the company, if the dog's nose already appears in the system, it's 95% accurate at identifying the dog again.

Dogs get lost all the time, and as more owners and clinics start relying on noseprints and noseprint technology, it will be much easier to reunite families. It could also make it easier for vets to identify dogs that have been stolen; if the noseprint is in a database of missing dogs and someone shows up with a match, claiming it's their pet, the vet will be able to call them out.